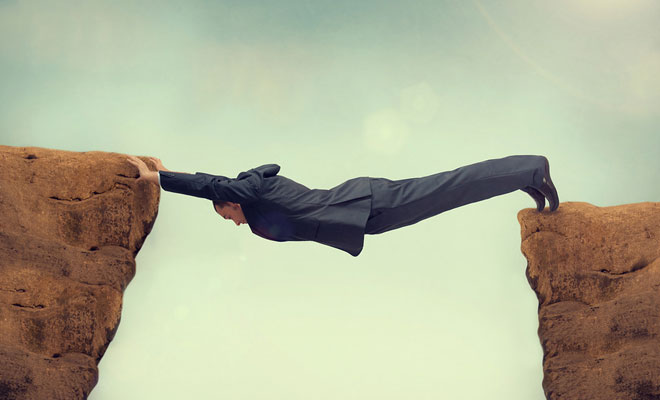 Rock and a Hard Place

Symbolic Modelling is an ‘outcome orientated’ methodology, but this does not mean we ignore problems. This article defines three kinds of problem, and describes how to work with client problems involving ‘binding patterns‘.

Paul Watzlawick and his colleagues define a difficulty as either “an undesirable state of affairs which either can be resolved through some common-sense action,” or a “common life situation for which there exists no known solution and which – at least for the time being – must simply be lived with.” These situations are the bread and butter of coaching. Even where a difficulty forms the client’s opening agenda, as a rule it’s possible for the client to move productively and relatively quickly to a desired outcome focus.

Watzlawick also says there is a different kind of problem: an “impasse, deadlock, knot” – orbind as Gregory Bateson called it. A bind is a pattern which the client finds inappropriate or unhelpful, and which he or she has been unable to change. It is not just a hard problem but, critically, a self-sustaining pattern which, experienced, from within, appears to have no escape.

Binds are often created when a ‘solution’ to a previous problem has unwanted side-effects. Take not telling the truth as an example. It might solve the immediate difficulty but the longer the pretense is maintained the worse it would be if the truth came out; therefore the lie has to be preserved, often by further lies, and so the pattern continues. However, this moves from being a difficulty to a bind when the client also wants to be truthful and feels guilty when lying. Now they have to deal with feelings of guilt and the fear of being found out. They cannot avoid one without triggering the other.

Thirdly, Gregory Bateson and his colleagues also specified the structure of a double-bind. These patterns are characterised by a primary bind, the resolution of which is prevented by the presence of a secondary bind, operating at a higher level. Even if the client discovers a way to extricate themselves from the primary bind, the secondary bind ensures they cannot implement or maintain the solution. A common secondary bind is the belief that something terrible will happen if the problem is spoken about. Thus the elephant in the office grows larger and larger because everyone fears for their job if they mention it. Fortunately, truly double-binding patterns are rare in coaching.

How will I know when to attend to a client’s problem?

We use two guidelines to help us decide when to facilitate a client to self-model their problem:

A.  When a client indicates that his or her desired outcome cannot or will not happen.

B.  When a client identifies ways for their desired outcome to happen and yet evidence shows they are not actually achieving it.

Both A and B indicate the presence of a binding pattern – and that will always involve at least two incompatible intentions.

Circularity – “I’m going round in circles”.

Every option is unacceptable – “All roads lead to hell.”

Oscillation – “One step forward, one step back.”

Stuck, trapped or imprisoned – “I’m between a rock and a hard place.”

Hugely complex narrative – “I’m lost in a maze of my own making.”

Self-referential – “I want to want to stop, but I don’t.”

There is a meta-pattern to all these configurations: within the binding logic, whatever the client does or imagines doing there is no way out of their predicament. That’s a tough place to be, especially if the client regards themself as a good problem solver. And like being in quicksand the more they struggle to apply their previously successful problem-solving strategies, the worse it gets.

To get relief from the impact of being bound by their own logic, the client will have devised ways to turn a blind eye to the reality of their situation. The relief can only be temporary because sooner, usually rather than later, something will trigger the bind and they will inevitably run through the pattern again.

Binds can maintain themselves for a very long time, but when a client seeks help it usually means the effect of not resolving the binding logic is escalating towards a threshold.  As the client’s response to a bind intensifies they find it harder to ignore and are motivated to do something about it. In the example of not telling the truth, perhaps guilt increases to an unbearable degree, or maintaining the pretense means life gets more and more convoluted, or a change in circumstances means the consequences of continuing with the untruth are extremely serious. In other words, when the pain of staying the same becomes greater than the pain of changing, people become willing to change.

How will I know when ‘A’ occurs?

In Metaphors in Mind we identified five stages to a Symbolic Modelling session. Each stage has its own indicators of when to attend to a client’s problem:

1. When a client cannot identify a desired outcome.

2. When a client cannot develop or maintain a rich description of their desired outcome.

3. When the anticipated effects of the desired outcome happening are unacceptable to the client (or organisation).

4. When a client cannot identify the conditions under which the desired outcome can be achieved. Or, the logic of the conditions necessary for change means they cannot be enacted.

5. When maturing a change is interrupted by a problem which cannot be incorporated into the desired outcome.

How will I know when ‘B’ occurs?

When, over a number of sessions, a client:

What do I do when a binding pattern is evident?

We use David Grove’s Clean Language to facilitate clients to self-model their internal and external behaviour until they identify what is keeping their desired outcome from happening. In other words, we help the client map the structure and logic of the pattern until they recognise they are caught in a bind. Once they have, with type ‘A’ we invite them to attend to the whole pattern.

Alternatively, with type ‘B’ when the client tells us that despite their best efforts they can only maintain their desired outcome temporarily, we facilitate them to self-model what happens at the moment they ‘fail’ to do the new behaviour and ‘revert’ to the old pattern. The way they do this will be part of the binding pattern.

Pattern-level modelling requires a different kind of thinking. It requires us to direct our questions to the network of relationships rather than to the details. Metaphors are tailor-made for capturing the complexity of a pattern. One client described their situation as like two gunslingers facing each other, neither wanting to have a gunfight but both knowing they will have to outdraw the other to stay alive, and if either makes the slightest move to walk away or negotiate they will get shot.

We invite clients to create a metaphor for their binding pattern by recapping the key relationships of the bind several times and asking:

Then we can work directly with the metaphor.

How will I know when the bind has been modelled enough?

There are three indicators, when:

The logic spontaneously changes – then we immediately start maturing the change;
or
A perspective emerges that ‘transcends and includes’ the incompatibilities of the binding logic;
or
The logic encompasses a complete sequence or a coherent set of premises with no gaps. New examples and metaphors may continue to appear but they add no further information about how the binding logic works.

What do I do once the client has identified the binding logic?

Having developed the characteristics of the metaphor, at some point we ask:

And when [whole pattern/maximum constraint/choice point], what would you like to have happen?

What if doing this doesn’t resolve the bind?

This indicates a double-binding pattern may be operating. We repeat the whole process identifying a metaphor for how the secondary bind is preventing resolution of the primary bind, i.e. we continue modelling at a higher, more inclusive level.

Do you have any other advice for working with binds?

Patience pays. It is advisable to lay out all the pieces of a jigsaw before starting to put them together. Modelling patterns is similar. It takes time and a number of repetitions before all the key elements and the logic of the relationships become clear.

Persistence pays. Clients in binds regularly get hooked by details and examples. These are just some of the few creative ways clients find to distract themselves from seeing the reality of their situation, especially the closer they get to ‘it’. Each time they do we invite them to return to the nub of the bind.

We hang in there especially when we feel an impulse to bail out or to switch to another process. At these moments chances are the client is on the edge of something significant. Our job is to ‘stay put’ and to keep the client attending to that edge. We use simple clean questions and do as little as possible. We do not attempt to solve the problem for them. Instead we give their creativity a chance to come up with something novel – and usually both of us are amazed. This is the mystery of emergence in a self-organising system.

We keep the client attending to the reality of their situation as they define it, using their exact words. This encourages them to acknowledge both the way things are and that the bind is unresolvable within its own logic – even if they don’t like to admit it. We do this by:

We keep checking the intentions of all symbols/agents/parts involved in the pattern — especially the  apparently problematic ones – since we expect them to morph as the client’s system adjusts to the implications of our questions. We keep track of all the current desired outcomes and intentions. When a change occurs, usually spontaneously, we mature it and check that all intentions get satisfied.

We utilise what the client is doing in the here and now whenever the binding pattern manifests in the room. When that happens we ask: And what’s happening now?. This is what we call  ‘going live’.

We‘re on the look out for potential resources. We take time to develop resources as they appear since these may be a catalyst for change or they may prompt another part of the binding logic to reveal itself. Often significant resources indicate their presence in very subtle ways. They can be anomalous, apparently insignificant, presupposed or hiding in the background. The end of the thread that unravels a binding pattern often occurs outside of the time / space / level / perspective that confines the original pattern.

We especially look out for small changes and mature these as soon as they occur. Sometimes the whole binding pattern transforms in a ‘road to Damascus’ moment. More often a small shift starts a contagion that eventually has a big effect. Even if nothing appears to change during the session, having self-modeled their binding logic and identified a desired outcome relevant to the bind, they will likely discover that things can never be quite the same again.

We retain a ‘Let’s see what happens’ attitude until we have behavioural evidence that any changes have been sustained over the long term. The effect of some changes can take weeks, months or even years to fully manifest.

Penny and James are supervising neurolinguistic psychotherapists – registered with the United Kingdom Council for Psychotherapy since 1993 – coaches in business, certified NLP trainers, and founders of The Developing Company. They have provided consultancy to organisations as diverse as GlaxoSmithKline, Yale University Child Study Center, NASA Goddard Space Center and the Findhorn Spiritual Community in Northern Scotland. Their book, Metaphors in Mind was the first comprehensive guide to Symbolic Modelling using the Clean Language of David Grove. An annotated training DVD, A Strange and Strong Sensation demonstrates their work in a live session.