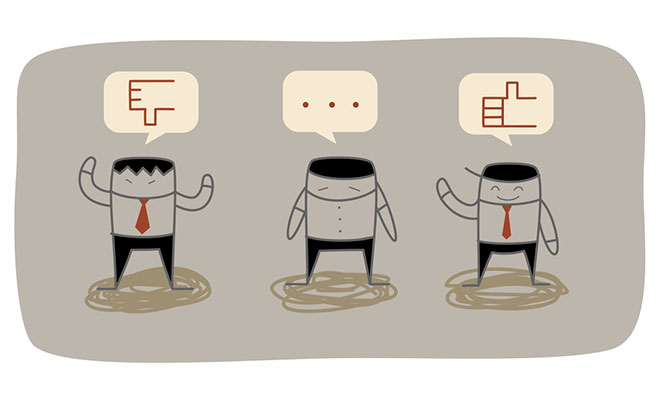 Research is finally showing the link between free-flowing feedback and better business results. In workplaces where managers don’t engage in feedback, employee engagement rates limp in at 29%. On the flip side, when feedback is regularly exchanged between managers and employees, engagement jumps to 79%.

When HBR asked 550 CEOs what factors were most likely to bring them business success in the next year, employee engagement ranked in the top three, above ability to innovate and even sales and marketing. Feedback leads to employees caring about their work, and if executives are right, that leads to business results.

But let’s face it, we’re human — and human beings find it tough to give and receive feedback. Many of us — let’s be real, all of us — get defensive when we hear it, and we assume nobody wants to hear it from us. So feedback gets chronically buried and put off.

But it doesn’t have to. In my experience, three simple principles have played a key role in unlocking feedback.

Assume that everyone wants to, and can, get better. When you do, you’re able to engage in discussions about areas for improvement with an optimistic and open heart. I’ve always tried to take this approach, but even my best intentions have failed me before. I’ve found myself unwittingly making up stories about a person’s character, rather than focusing on their actions, and was then surprised when tension seemed to spring up out of nowhere. Here’s how I figured out what I was doing wrong.

About a year ago, a few people came to me concerned about one of our teammates. They said she wasn’t open to new ideas and that her attitude was damaging the team. I asked her on a walk.

“I’ve been hearing that some of your teammates feel you aren’t open to new ideas,” I told her, trying to sound kind.

She looked sad and deflated. I was off to a rough start. Despite my friendly tone, I had already realized the feedback was unspecific, second-hand, and judgmental.

As I should have predicted, she countered with defensiveness. She told me she loved new ideas and started listing examples. We were heading for a debate about what she loves or doesn’t love. When it came to knowing what was going on inside her head, she had the clear upper-hand. As we ended the brief conversation, all I had achieved was a bigger wedge between the teammates.

The next week, I decided to try something new. I watched her in action during some meetings we were both in, looking for what other people might be seeing. And I saw for myself something that was likely causing at least part of the problem.

I pulled her aside. “I’ve found that when people are sharing new ideas and a member of the team is leaning back, arms folded, to me that person looks like they’re not open or interested.”

She looked concerned, but not defensive. There was no argument to be had here. She didn’t want to debate what folded arms meant. What I was saying was not specific to her. This opened her to noticing a range of subtle ways in which she was appearing closed to her teammates, and we worked together over the next month to address them.

Today, she is far more in sync with her team. Once she received feedback about her behavior (rather than her personality), she was able to address it straightforwardly. It was easy for her to take action because my feedback was specific, and closely timed to when the behavior occurred.

Takeaway: When people start saying that someone “is or isn’t something,” try to observe what that person is or isn’t doing. As close to the moment of observation as possible, present them with the behavior and offer to help them address it.

Your team members won’t always deliver the results you’re looking for on the first try. When you believe in the people on your team, and they know it, an imperfect deliverable can be seen as a natural part of the process. Honest, critical feedback can actually strengthen your bond rather than degrade it.

I learned this while reviewing a webpage mockup with a talented designer — a guy I knew was capable of great things. But the design I was looking at wasn’t great. He would have to go back to the drawing board. To deliver news like this, I used to flail back and forth between two commonly used but ineffective paths.

Bad approach #1: avoid telling the truth and talk around the need to start again. The unspoken assumption of this approach: he is lazy, defensive, or arrogant. The outcome: mediocrity. He doesn’t grow, I don’t get the site I know our customers need, and he comes to see me as a nice guy but not the kind of leader who can get him to the next level. And of course, employee engagement drops.

Bad approach #2: like the myth of Steve Jobs, say something tantamount to “this sucks.” Now he gets the message, but round two is likely to be met with resentment and fear. The outcome: mediocrity again. Yeah, Jobs ultimately got people to do great work, but I’m convinced that was despite his “this sucks” approach, not because of it.

I wanted something more honest than “good job,” but more empowering than “this sucks.”

What I tried instead: “I’m really happy you’re leading this project. I’ve seen you hit the mark with your work many times. When you do, it’s undeniable, everyone knows it.”

I paused and looked him in the eye, because I wanted him to see I was being real with him.

“In this case, I’m not seeing that quality yet. I believe in your ability to produce the great site that will enable our customers to collaborate better and help us achieve our mission. So I’d love to see a few more ideas.”

A few days later, he came back with something far more inspired. Something that lived up to that undeniable greatness we both knew he was capable of.

Takeaway: When giving critical feedback, remind your team member that you believe in their abilities. Once they’ve heard you, remind them of the core purpose you’re all trying to achieve — remember they want excellence as much as you do. Ask them to try again, using their potential for excellence and the company’s mission as a guiding light and inspiration.

Principle #3: Speak your feelings, without accusation

Sometimes it’s the feedback we don’t give — because we’re too triggered or embarrassed or angry — that does the most damage. Instead of being candid, we let things fester. But in saying nothing, we’re taking a chance that the relationship will erode, without the other person ever having a chance to adjust the behavior. Silence doesn’t honor the potential of our colleagues to listen and change.

“When you do X, I feel Y” can be an amazing tool for breaking the silence. This was driven home by an enlightening incident with my business partner Dustin.

We were working late together one night, and were both a little bleary-eyed when he pulled up the results of a product A/B test. I could have sworn the two graphs he was showing me looked exactly the same, and I was squinting to discern even the slightest distinction.

“See, the difference is amazing, right?” he said. “This just makes option B the clear winner.”

“What?!” I said, trying to keep a straight face, then failing and finally laughing out loud. “These look exactly the same!”

This was followed by an awkward pause. And then he said:

“When you laugh when I say something, I feel frustrated. I have a story that you’re condescending to me and not taking me seriously.”

In my mind, I was just laughing because the situation was funny. I actually think he’s brilliant, and was probably even right. I’m just not as good at reading graphs as he is. But hearing him give this simple, straightforward, and non-judgemental account of his emotions made me get it instantly in a way that “You’re being an asshole” wouldn’t have.

While it stung at first, I was grateful that he hadn’t kept his feelings to himself, which could have put a distance between us. Instead, he gave me the opportunity to explain myself, to make a mental note not to laugh in his face again, and for us to move on. There was no need to let negative feelings fester. No need for him to wonder if I disrespected him. No need for me to keep making the same mistake.

Takeaway: Tell someone when their behavior is creating a difficult reaction for you. Phrase it as “When you do X, I feel Y.” Then say no more. Give them a chance to respond. More often than not, you’ll find a great dialog emerges.

I’ve found that each of these lessons provide powerful tools on their own. But it’s their consistent practice — along with the commitment to learn more every day — that signals to our team that our company is a place where feedback can flow freely. Those awkward feelings from being honest and holding each other accountable will start to disappear. And each of us will grow faster than many of us thought possible.

I count myself on the side of those executives who believe ‘employee engagement’ is key to achieving business goals. But even if we’re wrong about that, feedback and engagement makes our workplace a far better place to grow, learn, and thrive together.