The Art of Stillness

“Going nowhere … isn’t about turning your back on the world; it’s about stepping away now and then so that you can see the world more clearly and love it more deeply.” 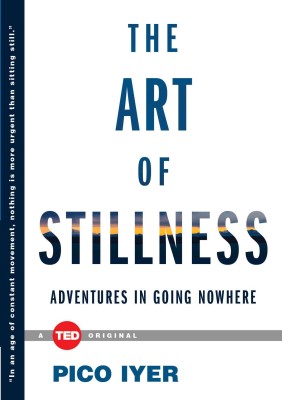 “Faith is the ability to honor stillness at some moments,” Alan Lightman wrote in his sublime meditation on science and spirituality, “and at others to ride the passion and exuberance.” In his conversation with E.O. Wilson, the poet Robert Hass described beauty as a “paradox of stillness and motion.” But in our Productivity Age of perpetual motion, it’s increasingly hard — yet increasingly imperative — to honor stillness, to build pockets of it into our lives, so that our faith in beauty doesn’t become half-hearted, lopsided, crippled. The delicate bridling of that paradox is what novelist and essayist Pico Iyer explores in The Art of Stillness: Adventures in Going Nowhere (public library | IndieBound) — a beautifully argued case for the unexpected pleasures of “sitting still as a way of falling in love with the world and everything in it,” revealed through one man’s sincere record of learning to “take care of his loved ones, do his job, and hold on to some direction in a madly accelerating world.”

Iyer begins by recounting a snaking drive up the San Gabriel Mountains outside Los Angeles to visit his boyhood hero — legendary singer-songwriter Leonard Cohen. In 1994, shortly after the most revealing interview he ever gave, Cohen had moved to the Mt. Baldy Zen Center to embark on five years of seclusion, serving as personal assistant to the great Japanese Zen teacher Kyozan Joshu Sasaki, then in his late eighties. Midway through his time at the Zen Center, Cohen was ordained as a Rinzai Zen Buddhist monk and given the Dharma name Jikan — Pali for “silence.” Iyer writes:

I’d come up here in order to write about my host’s near-silent, anonymous life on the mountain, but for the moment I lost all sense of where I was. I could hardly believe that this rabbinical-seeming gentleman in wire-rimmed glasses and wool cap was in truth the singer and poet who’d been renowned for thirty years as an international heartthrob, a constant traveler, and an Armani-clad man of the world.

Cohen, who once described the hubbub of his ordinary state of mind as “very much like the waiting room at the DMV,” had sought in the sequestered Zen community a more extreme, more committed version of a respite most of us long for in the midst of modern life — at least at times, at least on some level, and often wholeheartedly, achingly. Iyer reflects on Cohen’s particular impulse and what it reveals about our shared yearning:

Leonard Cohen had come to this Old World redoubt to make a life — an art — out of stillness. And he was working on simplifying himself as fiercely as he might on the verses of one of his songs, which he spends more than ten years polishing to perfection. The week I was visiting, he was essentially spending seven days and nights in a bare meditation hall, sitting stock-still. His name in the monastery, Jikan, referred to the silence between two thoughts.

One evening — four in the morning, the end of December — Cohen took time out from his meditations to walk down to my cabin and try to explain what he was doing here.

Sitting still, he said with unexpected passion, was “the real deep entertainment” he had found in his sixty-one years on the planet. “Real profound and voluptuous and delicious entertainment. The real feast that is available within this activity.”

Was he kidding? Cohen is famous for his mischief and ironies.

He wasn’t, I realized as he went on. “What else would I be doing?” he asked. “Would I be starting a new marriage with a young woman and raising another family? Finding new drugs, buying more expensive wine? I don’t know. This seems to me the most luxurious and sumptuous response to the emptiness of my own existence.”

Typically lofty and pitiless words; living on such close terms with silence clearly hadn’t diminished his gift for golden sentences. But the words carried weight when coming from one who seemed to have tasted all the pleasures that the world has to offer. Iyer beholds his encounter with Cohen with the same incredulous amazement that most of us modern cynics experience, at first reluctantly, when confronted with something or someone incomprehensibly earnest, for nothing dissolves snark like unflinching sincerity. For Cohen, Iyer observes, the Zen practice was not a matter of “piety or purity” but of practical salvation and refuge from “the confusion and terror that had long been his bedfellows.” Iyer writes:

Sitting still with his aged Japanese friend, sipping Courvoisier, and listening to the crickets deep into the night, was the closest he’d come to finding lasting happiness, the kind that doesn’t change even when life throws up one of its regular challenges and disruptions.

“Nothing touches it,” Cohen said, as the light came into the cabin, of sitting still… Going nowhere, as Cohen described it, was the grand adventure that makes sense of everywhere else.

But the paradox thickens the closer we get to its source. The kind of stillness Cohen bows to is a capacity most reliably acquired through meditation. And yet even though meditation is our greatest gateway to everyday transcendence, most adults in the West don’t practice it. The second most common reason nonpractitioners have against meditating is that they don’t have the time to do it — not enough time to learn to live with presence. (The most common reason to resist, of course, is people’s protestation that they simply can’t do it or aren’t cut out for it, which is merely the time argument by a guise of greater denial — it simply means that they haven’t put in the time to get good at it; there is a reason it’s termed a meditation practice — mastering it obeys the same basic principles of attaining excellence as any skill.)

A century after Bertrand Russell admonished that the conquest of leisure and health would be of no use if no one remembers how to use them, Iyer paints an empirical caricature of the paradoxical time argument against stillness. Citing a sociological study of time diaries that found Americans were working fewer hours than they were 30 years earlier but felt as if they were working more, he writes:

We’ve lost our Sundays, our weekends, our nights off — our holy days, as some would have it; our bosses, junk mailers, our parents can find us wherever we are, at any time of day or night. More and more of us feel like emergency-room physicians, permanently on call, required to heal ourselves but unable to find the prescription for all the clutter on our desk.

As most of us would begrudgingly admit, not without some necessary tussle with denial and rationalization, the challenge of staying present in the era of productivity is in no small part a product of our age itself. Iyer captures this elegantly:

Not many years ago, it was access to information and movement that seemed our greatest luxury; nowadays it’s often freedom from information, the chance to sit still, that feels like the ultimate prize. Stillness is not just an indulgence for those with enough resources — it’s a necessity for anyone who wishes to gather less visible resources. Going nowhere, as Cohen had shown me, is not about austerity so much as about coming closer to one’s senses.

Much like we find ourselves by getting lost, Iyer suggests, we inhabit the world more fully by mindfully vacating its mayhem:

Going nowhere … isn’t about turning your back on the world; it’s about stepping away now and then so that you can see the world more clearly and love it more deeply.

In a sentiment that calls to mind Annie Dillard’s memorable notion of“unmerited grace is handed to you, but only if you look for it,” Iyer considers the rewards that beckon us from that space of stillness:

It’s only by taking myself away from clutter and distraction that I can begin to hear something out of earshot and recall that listening is much more invigorating than giving voice to all the thoughts and prejudices that anyway keep me company twenty-four hours a day. And it’s only by going nowhere — by sitting still or letting my mind relax — that I find that the thoughts that come to me unbidden are far fresher and more imaginative than the ones I consciously seek out.

With a wink of wisdom that would’ve made William James proud, Iyer adds:

It takes courage, of course, to step out of the fray, as it takes courage to do anything that’s necessary, whether tending to a loved one on her deathbed or turning away from that sugarcoated doughnut.

Related ItemsexperienceFaithhonor stillnessmeditationpassion
← Previous Story What Happened when I Open-Sourced my Brain Cancer
Next Story → No Time To Meditate? Learn How To Effectively Meditate In Just One Moment