The Art of Artistry

The biggest difference between famous artists and “normal” people is artists are driven to do what they do. They have to do it. What they are making is important enough to pursue for it’s own sake, regardless of its financial returns. And surprisingly, it’s often less about innate talent than the compulsion to keep going. So it’s not just a skill or field they were interested in, and got good enough to make a living from; it’s a compulsion or passion to gain mastery. The compulsion or passion to express themselves, to explore an idea and to make art. One without the other rarely seems to work.

Van Gogh first focused on art after a series of career failures. He was 27 years old and not particularly skilled. By the time he shot himself 10 years later he was an impoverished, unrecognised and a much ridiculed genius whose unrepentant expressionism set off a grenade in the tidy garden of impressionism.

And in between? He drew. He painted. Obsessively.

The Carpenter.1880 Flat, stiff, out of proportion 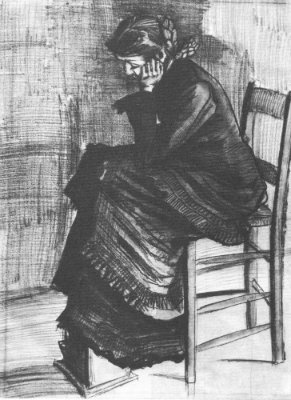 TS Eliot—probably my favourite poet of all time—worked full time throughout his career, starting at Lloyds bank and ending as director at Faber and Faber. Which he really enjoyed. Throughout his career he wrote compulsively in his spare time, polishing and refining his ideas and poetry until they shone like cut crystal.

I said to my soul, be still, and wait without hope
For hope would be hope for the wrong thing; wait without love,
For love would be love of the wrong thing; there is yet faith
But the faith and the love and the hope are all in the waiting.
Wait without thought, for you are not ready for thought:
So the darkness shall be the light, and the stillness the dancing.
(East Coker, 1940)
David Bowie (be still my beating heart—have been a Bowie tragic most of my life) was obsessed by music from childhood, forming his first band at 15. He was still in his teens when he was spotted as a talent, but he couldn’t convert it to success. Even his hit with Space Oddity at 22 failed to launch his career. He finally achieved “overnight” success with Ziggy Stardust when he was 25. And in between? He did what he could to scrape a living; he studied, made art and music in many different styles, with a string of different bands, mime with Lindsay Kemp, painting, writing, philosophy. All of which came together in his “mixed media” performance as Ziggy and set the scene for the musical mutations and explorations that made him so consistently influential for the next 40 years.

These artists weren’t born that way. They didn’t come out fully formed. They were genius artists because they were obsessed by what they did—obsessed enough to put in the hours, to gain mastery, to challenge and explore and experiment, to break the rules, to fail repeatedly, and to follow their inner voice in the face of public indifference, skepticism and rejection. Obsessed enough to gain artistry. Because it meant something significant. Because it gave them purpose.

Which is frankly no different to how Steve Jobs approached the world. Or Ed Catmull or John Lasseter from Pixar. It’s what makes Apple and Pixar as organisations so unique and so confounding to business commentators. The same is true of Warren Buffet. And David Kelley from IDEO. And Jim Highsmith and Kent Beck, who developed the Agile programming philosophy. They do what they do for it’s own sake first. Obsessively.

It’s the reason I chose to do what I’m doing instead of going back to corporate life ten years ago. Despite the fact this road was infinitely harder, riskier and took much longer than planned to support myself. It’s what I strive for and so often fall short of, and what gives me the impetus to pick myself up and try a new angle every time I stuff up or hit a major roadblock. Which is a lot. I may never reach the dizzy heights that these guys have but frankly I couldn’t give a rats. That’s never been the point. I do what I do because I love it and I believe in it and it makes me feel alive. I know people find it useful, and it brings me joy.

So what’s your art? What do you do or make or pursue entirely for it’s own sake? That you do with obsession and purpose just because it matters? Where you strive for mastery – yet realise the more you learn the less you know? How can you do that in more areas of your life? In how you make a living? In how you relate to people?

Where is your artistry?

Mo Fox is a creative strategist and true hybrid thinker; an accomplished artist with an extensive corporate background in advertising and strategy who consults, speaks, writes and trains in the area of wicked problems, creativity and design thinking. Her eclectic background means she thrives on combining structured analytical thinking with free-form creativity to get sharper, faster, stickier results. She has worked across a wide range of industries here and in the UK, with companies as varied as Toyota, IKEA, Kellogg and SAP and is known for her ability to navigate wicked problems and generate innovative ideas in a short space of time – always engaging people in the process. Mo is the creator of Welcome to Wicked™ and Studio Thinking®, methodologies that fuse art principles with business strategy to achieve commercial business results by teaching people how to think differently and leverage their innate creativity – the secret to having a true competitive edge.